“Set the time of sitting! Make it just as long as it takes one fragrant incense stick to burn down.

In that time we can thread the basic principles of Buddhism into a lovely string of pearls.”

Ch’an Master Hsu Yun lived to be 120. He lived from the mid 1800s until the mid 1900s and never traveled to the West—but many westerners traveled to the East to learn from him and his influence is felt here.

As a child, he saw monks performing a funeral service for his grandmother. Seeing these monks gave him inspiration; he started tracking down and reading sutras and he fell in love with the Dharma.

At the age of 19, he ran away from home to become a monk. This means he spent 100 years studying and practicing the Dharma full time—that’s longer than any teacher I can think of.

His teachings helped Ch’an Buddhism survive into the modern age. He is given credit for keeping Ch’an alive in a time when it could have easily fallen apart.

One, he was a strong proponent of the Hua tou, or what’s this, method of meditation.

Two, he was known for giving the same amount of respect to layman as to monks. He said that laymen were as capable of attaining Enlightenment as monks. In some lineages of Buddhism, there are those that disagree, that think that monks are the only ones capable.

Three, he talked about Enlightenment. In many Buddhist traditions, discussing the actual experience of Enlightenment is frowned upon. Master Hsu Yun wanted to guide people to awakening to their Buddha Nature and he didn’t think there was a problem with talking about it in simple and direct ways.

He actually described his own experience of Enlightenment with two gathas:

“1 – A cup fell to the ground
With a sound clearly heard.
As space was pulverised,
The mad mind came to a stop.

2 – When the hand released its hold, the cup fell and was shattered,
‘Tis hard to talk when the family breaks up or someone dies.
Spring comes with fragrant flowers exuberating everywhere;
Mountains, rivers and the great earth are only the Tathagata.”

From his Enlightenment at the age of 54 until his death, Xu Yun traveled around the countryside teaching sutras, transmitting the precepts, building temples, and starting seminaries for novices, Buddhist associations for laymen and free Buddhist schools for children.

In the 1930s, when he was in his 90s, Hsu Yun decided that spreading Ch’an to the West was a good idea. So, he asked his lay student Charles Luk, to translate as many Ch’an teachings into English as possible. (Charles Luk was very prolific in these translations and many of them are available online.)

As a result of his long life and lack of scandals, Hsu Yun is revered in China and is slowly becoming known in the West.

He spent his life rebuilding temples across China and visiting other Buddhist teachers; it is thought that Chinese Buddhism might have died out without his century of work preserving it.

Thanks to Master Hsu Yun, a transmission of Chinese Buddhist teaching has spread from China out into the rest of the world.

Thanks to Master Hsu Yun, there are authentic Ch’an lineages that are growing and spreading. 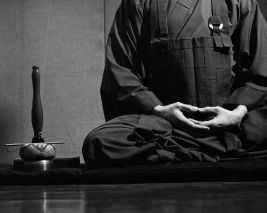 Concern For This Life

You Are Not Your Home