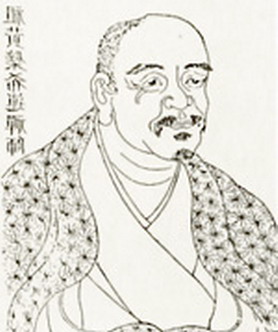 Huang Po was a Zen Master in China in the 800s.

He taught that mind cannot be sought by the mind. One of his most important sayings was “mind is the Buddha.” He said:

“All the Buddhas and all sentient beings are nothing but the One Mind, beside which nothing exists. The One Mind alone is the Buddha, and there is no distinction between the Buddha and other beings.”

“To awaken suddenly to the fact that your own Mind is the Buddha, that there is nothing to be attained or a single action to be performed—this is the Supreme Way.“

He also firmly rejected all dualism, especially between the “ordinary” and “enlightened” states:

”If you would only rid yourselves of the concepts of ordinary and Enlightened, you would find that there is no other Buddha than the Buddha in your own Mind. The arising and the elimination of illusion are both illusory. Illusion is not something rooted in Reality; it exists because of your dualistic thinking. If you will only cease to indulge in opposed concepts such as ‘ordinary’ and ‘Enlightened,’ illusion will cease of itself.“

Since all is Buddha-mind, all actions reflect the Buddha, are actions of a Buddha. Huang Po’s teaching on this reflected the Indian concept of the tathatagarbha, the idea that within all beings is the nature of the Buddha. Therefore, Huang Po taught that seeking the Buddha was futile as the Buddha is within us already:

“If you know positively that all sentient beings already one with Bodhi (enlightenment), you will cease thinking of Bodhi as something to be attained”

Huang Po was adamant that any form of “seeking” was not only useless, but obstructed clarity:

“Sentient beings are attached to forms and so seek externally for Buddhahood. By their very seeking they lose it”.

Furthermore, he claimed that

‘Studying the Way’ is just a figure of speech […] In fact, the Way is not something which can be studied. You must not allow this name to lead you into forming a mental concept of a road.“

“If you students of the Way wish to become Buddhas, you need study no doctrines whatever, but learn only how to avoid seeking for and attaching yourselves to anything.“

Huang Po often railed against traditional Buddhist textual practices, pointing to the necessity of direct experience over sutra study. If the truth is within us already, why would we need to study sutras?

Concern For This Life

You Are Not Your Home