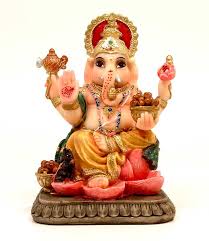 I noticed the small Ganesh statue behind the counter as I was purchasing a six pack of Hard Orange Cream Ale. The statue was pink and enclosed in glass, as little statues of this kind sometimes are. I thought he appeared to have a beatific smile, but who the hell can tell if an elephant is smiling? Not me. The Remover of Obstacles wasn’t facing the customers, it wasn’t there for all to see. It was there for the man working behind the counter to look at.

And it was very small. It certainly escaped the notice of most patrons. I only noticed it because I notice iconography and spiritual things. That’s when I realized that the Indian man who runs the liquor store in my neighborhood is a Hindu. Not a surprise at all, of course. But it just served as a big reminder to me that spirituality exists everywhere.

People tend to think that spirituality only exists in sacred places. Those of us who are paying attention, the mystics, see it everywhere. There’s a metaphor we talk about in Buddhism sometimes. It’s called “Indra’s Net”. It’s an infinitely vast net filled with jewels. Each of the jewels not only reflects all of the other jewels. This represents the interconnectedness of all things. Every jewel reflects every other jewel. There is no separation. We are the same. You and I reflect each other. We are not separate from one another in any meaningful way.

Why did I mention this?

More importantly, our spiritual practice doesn’t just exist in the temple and on the cushion. Our engagement must be in all of our lives.

I think that’s why even when he’s in what might be the least sacred space he goes to, that Indian man has a little sacred figure displayed. Because sacredness and spirituality exist everywhere, not just where we expect them. The mystic’s journey doesn’t exist just at specific places and times. The mystic’s journey is ongoing.

The world is my temple.

One thought on “All Places Are Sacred”

Daniel is a Buddhist Meditation teacher.  In his day job he’s a labor activist.