I’m here to provide encouragement because we could all use some.

The truth is that meditation is hard and you have to work at it. People that are trying to sell you things may try to convince you that it’s easy. It’s not. What’s easy is finding ways to avoid doing it. I think of it as like flossing. It’s something we know is good for us that we don’t really want to do.

Having a plan helps in a big way. So, if we say, “This is the time we meditate and we do it in this place,” that can be really helpful. If we can create a routine, that is best. Doing it in a group helps too. Although working with your mind is a solitary practice, we can start to feel like we have a team to encourage us and make sure we stay on track.

That matters. I started a weekly meditation group to encourage others, but the truth is I know that inviting other people to meditate with me is going to do a lot to motivate me to make sure I practice. It’s the best way to make sure I meditate regularly. I can’t make excuses in that situation.

Another thing. To me the path is about being real, about putting down your shit and learning how to be more genuine. That’s the place I come from in my teaching. You will find meditation teachers who don’t talk about real life and who talk in weird sing-songy voices That’s off putting to me. It seems weird. I’m totally willing to be authentic and open and I think that’s the thing that makes what I have to offer unique. Many other meditation teachers will create distance where there doesn’t need to be any.

want to come meditate with me?

want to support this work? You can by clicking here:

It’s a really good feeling sometimes when we think our meditation is working. If we’ve been struggling for a while and then we are suddenly able to stay with the breath or stay with our experience for several minutes, that can be a satisfying experience.

We spend so much time in the daydream, not being fully present that when we step into this moment it can be a shock to our system sometimes. And that can create it’s own problems. Once we have a moment of clarity, we might tend to cling to it. It can be very discouraging when some of our meditation sessions feel successful and others do not. It’s so hard to maintain a passive attitude sometimes.

What I want to encourage you to do is accept whatever your experience is in your meditation practice. This can be very challenging. We want to have feelings of satisfaction or frustration and just notice them, just be aware of them and be with them. If we attach a lot of significance to either experience, then our practice could suffer. We want to be with these feelings and not cling to the satisfaction but also not push away the frustration. The fact is that sometimes our sit will feel really successful and other times it will feel like a failure.

Your attention will improve over time. This is about training the mind. No one expects you to be great at this right away. No one is great at this right away. Our minds naturally wander and get lost. What we want to try to do is have a passive attitude so we aren’t really hard on ourselves when we get off track. We want to try to learn how to gently bring the mind back.

Hopefully with practice it gets a little easier to simply notice when our minds are wandering and to just bring them back to the present moment without getting caught up in it.

I didn’t intend to start a community and I’m not sure if I have.

I created Fountain City Meditation as a project because I was inspired to serve others by providing meditation instruction and encouragement. People need a lot of encouragement in meditation practice, I think. And if I can reach people that aren’t being reached right now, that’s even better. I think many meditation communities might not be as focused on encouragement as they could be. People need a support system for their practice and to me THAT is the central role of a meditation/spiritual community.

I was teaching in a Buddhist community here in Kansas City for a while and then one day I wasn’t anymore. That’s not something to get into here except to say that my inspiration to help and encourage others didn’t just go away, so I spent time thinking about what I can do.

I have considered asking some of the other wonderful communities here in town if they’d be willing to bring me on as a teacher, to work together. But so far I haven’t asked. I have a fear of rejection, I think. Teaching in an established community would be pretty great though. Insecurity is a weird thing.

I recorded an episode of my podcast Scharpening the Mind with my friend Daniel Symes on the subject of community because I think it’s an interesting subject. You can listen to that podcast here:

Is Fountain City Meditation a community?

I tried to create a situation where people come meditate with a minimum of baggage. We’re outside, so some of the intimidation of entering a new place isn’t there. Some people just come once, and some people come over and over. Some people come alone and some people bring friends. Many of the people that come just do the sitting practice and leave, without talking to anyone. I think that’s really great because I’m happy to welcome the most introverted among us. I think a lot of really shy people stay away from spiritual communities because they’re nervous about meeting new people. I know that when I first became interested in meditation practice, I had some issues around being reluctant to go meet people.

You don’t have to meet anyone to come to Fountain City Meditation.

Also, there’s no religion or ritual attached to what we’re doing.

I call it meditation without baggage. My hope is that people who are devoutly religious (of whatever kind) and people who don’t like religion could be equally comfortable coming to one of these events. I’m hoping that by doing outdoor events I can attract people who, for various reasons, don’t really want to go to temples or yoga studios or other traditional settings. Going inside an unfamiliar place can intimidate people too.

There’s no membership, I’m not trying to sell anything and I don’t even ask for donations. The great thing about meeting in a public outdoor space is that it doesn’t cost me anything (there are downsides too, of course) so I don’t need to take donations. All I’m spending is my time.

That might not seem like a big deal, but I know some people stay away from communities because they feel guilty when donations are being accepted. I want to reach people that feel weird when they hear the word “donation”.

I wanted to create a situation where all the things that scare people off or make people reluctant aren’t present.

I’m not sure if I’m achieving that, but I do think there are people that are interested in meditation that aren’t being reached by traditional efforts.

Non-joiners could use some encouragement too.

Is Fountain City Meditation a community? I think that’s not up to me.

It’s up to you. What do you think?

want to come meditate with me? You can here:

A while back I wrote an article for Patheos on the subject of Buddhist communities. You can see it here:

I created an all new website for Fountain City Meditation.

If it’s going to grow and be a community, it deserves it’s own website. This is still very much a work in progress, but have a look:

Let me know what you think.

You can get another version of this talk that’s audio only here: 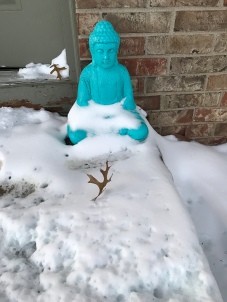 The world is a crazy place right now and I am scared.

Lots of people’s lives are turned upside down right now by current events and things are really hard to understand and hard to deal with.

A student went to Nakagawa Soen Roshi during a meditation retreat and said, “Master, I am feeling very discouraged. What should I do?”

And Roshi replied, “Encourage others.”

That story has meant a lot to me since I heard it. I think we’re best at encouraging others when we feel discouraged and it feels like there’s no hope.

I am discouraged. How can I encourage you?

Encouragement is central to this new project and I will not lose sight of that intent. I want to encourage you.

I teach online. I think if you’re reading this you know that. I reach people all over the world and it’s rewarding. I’m trying to figure out if I can serve my local community too.

Right now I’m envisioning “Fountain City Meditation” as a floating community, a group where we come together at different places and different times.

I want to provide opportunities for meditation practice and I want to encourage that practice. There are several meditation communities in town. I want to reach the people that aren’t feeling served by those communities. I know those people exist.

I used to belong to a Buddhist community as a very active member, I was around for years. I saw so many people come and go.  Some people would come once or twice and then go. But others would stay for months and years and then just be gone. I don’t know what the disappearing people needed. I just know they weren’t getting it. I want to reach people that feel like they don’t belong anywhere. I want to reach people that no one is reaching and I want to encourage them.

(if you want to know why I left, just ask. I want to share with others and I want others to feel comfortable sharing with me. There are real human issues in life and no one is perfect)

I also want to reach people that maybe don’t feel totally lost, but are interested in something a little different.

So, this is my invitation to you, if you’re in or around Kansas City.

If you want a community where none of us pretend that we’re perfect or that we have it all together.

If you’ve ever felt like you don’t belong in a Meditation Center or  Buddhist Temple.

If you’ve ever felt like you’re the only person in the meditation room who doesn’t know what’s going on.

If you really want a sense of community with your meditation group.

If you feel like you can’t meditate, or you’re not calm enough, or everyone will look at you like a fraud.

If you feel alone in a room full of people because no one in the community has reached out to you.

Come join. I want to encourage you.

I don’t know how many events we’re going to have, or how often. A lot of that will depend on how much demand there is.

But I’m inspired to serve. I’m here to help.
What do you need?

How can I encourage you?

I had the opportunity to give this talk through Daily Dharma Gathering and it was streamed live on Susan Piver’s Facebook page. It was a great experience and I wanted to make sure I shared it with you. Watch it here.

Daniel Scharpenburg is a labor activist and certified meditation teacher in Kansas City. Daniel was trained to lead meditation at the Rime Buddhist Center.

A Look Back: Dharma School