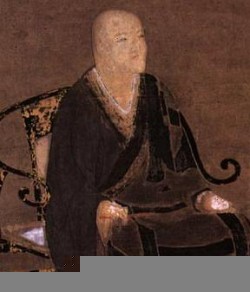 I think it could be argued that the history of Zen is really a history of spiritual iconoclasts and revolutionaries, spiritual adventurers who saw the way things were and sought to innovate instead of merely accepting the status quo.

Dogen is  looked upon by Soto Zen Buddhists as an ideal to live up to; he represents everything that Soto Zen is and is thought of as mainstream.

But, in the beginning, he was a radical. He saw the Buddhism that had arrived in Japan and he found it lacking. So, he traveled to China to see what else he could learn—and he came back and started the Soto Zen sect.

Dogen quickly learned the meaning of the word impermanence—while still young, he lost both his parents. So, he was inspired to study Buddhism.

I’ve always felt a special connection to Dogen because losing my parents is what inspired me as well.

Dogen was an illegitimate child in a noble family and became an orphan at an early age and he became a monk at Mount Hiei, a Tendai Buddhist monastery.

Later in life, he had this to say about his time there:

“They maintain that all beings are endowed with Dharma-nature by birth. If this is the case, why did the Buddhas of all ages find it necessary to seek enlightenment and engage in spiritual practice?”

This is significant. Dogen is a hero now, so much of Zen stems from him. But he was, like many historical Zen Buddhists, someone who constantly asked questions. We need to learn this lesson—the Buddha told us to investigate thoroughly.

As a young monk, he was questioning Buddha nature, a very well known Mahayana teaching. He found no satisfactory answer to his question. He asked several Tendai teachers and one of them suggested that he travel to China and study Ch’an Buddhism.

In China, Dogen went to several leading Ch’an monasteries. At the time, most Ch’an teachers relied heavily on the use of gong-ans (koans). A simple description would be these are riddle-like phrases that are supposed to shock the student into having some sort of realization.

Dogen studied these gong-ans, but he didn’t understand why so much emphasis was placed on them. He found them to be a little bit useful, but only to a certain point. He wondered why there wasn’t more emphasis on sitting meditation and sutra study.

He was offered Dharma transmission and he turned it down. He wasn’t happy with the teachings, so he rejected the teacher’s approval. He wanted to find a lineage that was more in line with his views. He didn’t want Dharma transmission from a teacher that disappointed him.

After Dogen had been in China for two years, he heard about a Ch’an master who had a different style of teaching.

Rujing was a teacher in the Caodong School of Ch’an.

Dogen traveled to Mount Tiantong to meet him.

Rujing told Dogen to “Cast off body and mind.”

Dogen said that this was when he became enlightened. The simple hearing of that sentence gave him an awakening experience.

Rujing’s teaching was based on sitting meditation and Dogen really connected with it. This was a big change from some of the other Buddhist teachers he had met. There are even some lineages in Zen today that hardly meditate at all, focusing almost entirely on gong-an practice.

He brought the philosophy he had learned to Japan, naming it ‘Soto’ Zen and created his own temple called Eihei-ji.

He was a prolific teacher and writer. He composed a long text called the ‘Shobogenzo’ that is considered one of the most important works in the Zen tradition.

He died at the age of 53, after giving Dharma transmission to one of his students. Soto Zen grew a great deal and Dogen’s legacy has been a great influence on Japanese Buddhism.

Dogen repeatedly emphasized the importance of ‘zazen’ or sitting meditation. He said that meditation is the core of Zen practice and study. He taught it to both monks and the laity, saying that everyone should learn it. This is a departure from some teachers in the past who ad said that these teachings should be available only for monks and nuns.

This is what he wrote about it:

“For zazen, a quiet room is suitable. Eat and drink moderately. Cast aside all involvements and cease all affairs. Do not think good or bad. Do not administer pros and cons. Cease all the movements of the conscious mind, the gauging of all thoughts and views. Have no designs on becoming a Buddha. Zazen has nothing whatever to do with sitting or lying down.”

He described zazen and enlightenment as one. Sometimes we might feel like our meditation is unproductive. Dogen is telling us that that’s not the case, that Enlightenment is right here for us to get. This is important because when we think of Enlightenment as something ‘out there’ that can be harmful to our spiritual practice. It can cause us to look outside of ourselves instead of within.

“To practice the Way singleheartedly is, in itself Enlightenment. There is no gap between practice and enlightenment or between zazen and daily life.”

I went on a retreat at the Rime Buddhist Center over the weekend. I am still feeling incredibly inspired by it. It was my first ‘sesshin’, Soto Zen retreat. It was the best retreat I’ve ever been on. The retreat was led by a visiting teacher named Karen Maezen Miller. She lives in California but comes to visit the Rime Center every few years. There were thirty of us attending.

She started with a talk about the meaning of Zen and ‘the beginner’s mind’. We had a completely silent lunch, which was an odd experience, and then we engaged in mindful activity, walking around the building wiping up dust with rags.

Then she held private one-on-one interviews for two hours. During this time, we alternated between twenty minutes of ‘zazen’, sitting meditation, followed by ten minutes of ‘kinhin,’ walking meditation.

Only eight of us got the chance to go meet with her one-on-one. I was the last person to go.

I knew the customary ritual. I entered the room where she was sitting. I bowed and said, “My name is Daniel. My practice is counting the breath.”

I asked her some questions about the differences between Rinzai Zen and Soto Zen. She told me that although she is known as a Soto Zen Priest, she practices both and her teacher practiced both as well. Rinzai is known for relying heavily on Koan practice and Soto is known for relying heavily on meditation. She pointed out that Dogen Zenji, the founder of Soto Zen wrote many Koans. There is plenty of overlap between the two schools of Zen. So, while I’ve been studying with a Rinzai group, I shouldn’t be worried about wishing it was Soto instead. (Or, for that matter, worried about the fact that the other group I study with is Vajrayana).

She said that now that we’ve met and had this retreat together, all of her lineage, going back to the Buddha, has now touched me. I certainly felt touched.

But, at the same time, she said lineage doesn’t matter too much. Meditation and mindfulness are what’s important. And it doesn’t really matter whether I study under a Soto or Rinzai teacher.

At the end we got to say some parting words to her in front of everyone.

I said, “I first read your book ‘Momma Zen’ because I wanted to learn about Buddhist parenting, because I’m a Buddhist parent myself. And I run the children’s program here at the Rime Center. I just wanted to tell you thank you for coming and you’ve been a big inspiration to me.”